With its controversial views on marriage and links to a banned religious sect, Global Ikhwan is proving divisive in Malaysia. Marta Kasztelan looks at a conglomerate that is less a company and more a lifestyle choice for its 4,000 ‘members’.

Sliding through his smartphone photo gallery, Lokman Hakim proudly shows off his 27 children – 15 from his first wife, eight from the second, one from the third and three from his fourth. The 47-year-old Malay considers himself fortunate because so many women agreed to enter into a polygamous union with him. While such an arrangement is legal in Malaysia, it is largely frowned upon in the moderate Muslim country.

“That’s life. It’s just something you have to go through,” explains Lokman, as he pockets his phone.

A more worrying issue, he says, is the stigma attached to his current occupation: he is the chief executive of Global Ikhwan, a Malaysian company with links to banned Islamic sect Al-Arqam.

Founded in the 1960s by Ashaari Mohammad, who had 40 children with his four wives – the maximum number allowed under Malaysian law – Al-Arqam owned a number of businesses and had strict rules regarding Islamic dress code and behaviour.

“It started with one family, then friends [joined] and it eventually lead to intermarriages,” Lokman explains.

Al-Arqam was banned by the Malaysian religious authorities in 1994, and five members were arrested and detained under the Internal Security Act. The teachings of Ashaari were considered deviant by the authorities because they allegedly alluded to supernatural powers and promoted unorthodox views about communicating with the Prophet.

After the ban, Ashaari set up what Lokman describes as an “Islamic business”, called Rufaqa, which became Syarikat Global Ikhwan and then, in May 2013, just Global Ikhwan. 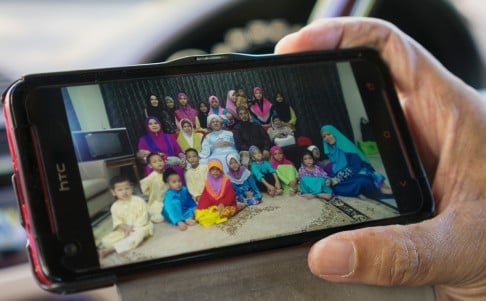 A picture on Lokman’s phone shows him with some of his 27 children.

After Ashaari passed away in 2010, one of his widows, Hatijah Aam, took over his business empire. In May 2013, she was arrested when returning from Saudi Arabia on charges of trying to resurrect the movement, through the company.

At the time, Hatijah was president of the infamous Obedient Wives Club – an initiative launched by the female employees of Global Ikhwan – which called on women to “be obedient and act like first-class prostitutes” to keep their husbands from straying. The club, which was also accused of promoting polygamy, attracted widespread condemnation from the Malaysian public and international women’s rights groups, who said it didn’t reflect Islamic values and was detrimental to women.

Lokman, however, is adamant: those days of controversy are over. Following the outrage, he and a few hundred other Global Ikhwan employees attended 500 hours of “rehabilitation courses”, conducted by the Selangor Islamic Religious Department, and, in a public ceremony in October 2013, renounced their beliefs.

“We have no more problems with the authorities. You can see my photos with everyone, politicians, businessmen, the prime minister. Even with the religious authorities,” he says, visibly content as he drives around in a large Mercedes, showing off the Global Ikhwan headquarters.

Tucked away in a residential area of the commuter town of Rawang, 30km north of the capital, Kuala Lumpur, the company’s premises resemble a self-sufficient commune.

The estate features a prayer room, cafés, a bakery, restaurants, a health clinic – with a maternity ward – a travel agent, a clothing store, a small hotel and a recording studio, where Ikhwan’s entertainment-minded employees produce music and television dramas.

Among the company’s core businesses is the production of halal food, which it sells in its supermarkets.

Although Global Ikhwan officially rejected the “deviant” teachings of Al-Arqam, Lokman says, it maintains the Islamic business ethics of the original movement, which centre on “fardu kifayah” – community obligations.

Consequently, the company charges unusually flexible rates for the services it provides.

In the company clinic, for example, clients pay as much as they can afford – those with little means pay nothing.

The goal is not to make a profit; rather it is to adhere to good Islamic practices. 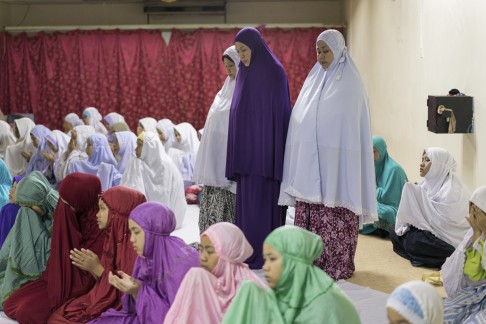 Walking around the lively facilities one cannot help but notice the profusion of colourful headscarfs.

“One quarter of the employees are men,” says the chief executive. “The rest are women. Islam allows men to marry more than one woman, with the aim of having a bigger Islamic society that can work together and do good things.

Here we encourage women to work, because they have to contribute to the society.”

All of Lokman’s wives, who are, in one way or another, linked to the original Al-Arqam sect, work or have worked for the company.

“You see, we are trying really hard to remain a religious business,” says Lokman. The only means of truly achieving this, he says, is the intermarriage of company employees, who today number 4,000 and often refer to the firm as a “movement” and to themselves as “members”. They come from countries where the business operates: Saudi Arabia – where most of its profits reportedly come from – Egypt, Indonesia, Dubai, Turkey, Jordan, Thailand, Singapore, Australia, Germany and Britain, to name a few.

Mardiona Hakim is manager of he Global Ikhwan launderette, and Lokman’s fourth wife. Sitting on the floor of their Rawang house, clad in a bright pink hijab, the 34-year-old Australian explains her association with the movement, which has long had followers in her home country.

“When I was born, my parents were already members [of Al-Arqam]. They joined the movement for our benefit and to do good things for others.”

Having become disillusioned with the Western lifestyle in Australia, Mardiona relocated to Malaysia in 2000 and enrolled in an Islamic school run by the company. It was there that she first spotted her future husband.

Lokman explains that children of Global Ikhwan employees usually go to “normal schools” from the age of seven to 12 and then, depending on their parents’ wishes, further their education in Malaysia or Egypt, concentrating on Islamic studies.

In Malaysia the company runs 50 educational establishments for children and young adults – all registered with the authorities. Students sit the same exams as those taken at government faith schools, as well as study the movement’s religious curriculum. 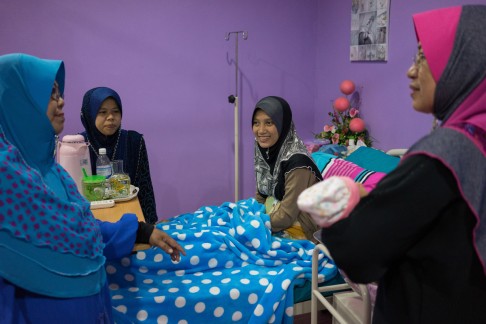 Azlina (right) visits a friend who has recently given birth at the Global Ikhwan health clinic.

For girls aged 13 and over, the Sekolah Menengah Islam Global Ikhwan is located in Puchong, in the southern suburbs of Kuala Lumpur. Here, daughters of company employees attend classes with orphans or students from families with limited means. The education is free, in keeping with the company’s ideology of “doing good deeds and spreading love”.

“For us at Global Ikhwan, it is so scary to watch the youngsters’ morale degrading so fast in today’s world,” says Wan Nor Fauziah Meor Mohammad, the school administrator.

“As Muslims, we need to prepare them, so they can choose between hell and heaven. It is our responsibility.”

Accordingly, the students’ lives revolve around prayer and religious studies, Arabic, maths and vocational training that mirrors the corporate activities of Global Ikhwan.

The girls can choose whether they want to pursue gardening or work at a café, a laundrette, a second-hand shop or the nursery, which cares for the infants of school staff during work hours. They also learn how to cook and clean.

This, says Lokman, prepares them for employment by Ikhwan and facilitates intermarriage within its worldwide network of employees.

“It’s easier because we have the same principles and understanding,” he adds.

A volunteer teacher at the school has hidden her involvement with the company from her husband, who dislikes the idea of polygamy. Her involvement with Ikhwan began 10 years ago, when, in search of a religious teacher, she attended a lecture held by one of the movement’s murshids – Islamic spiritual guides – who to many devout Muslims are indispensable if one is to “reach Allah”.

“All the ladies in the class were really nice to me and then I started falling in love with the teacher,” says the woman, who requested to remain anonymous.

Her desire to be accepted by the company was such that she tried to marry off her daughter, who “is OK with polygamy”, to one of the members. But because this attempt did not follow internal procedures, it was turned down by the company’s marriage committee, from which potential spouses must gain approval. 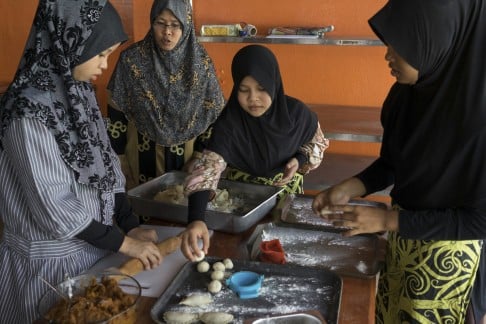 A cooking lesson at the Sekolah Menengah Islam Global Ikhwan school, in Puchong.

According to the mother, the rejection left both her and her daughter devastated.

Many company employees say loved ones were initially displeased by their decision to join.

Doctor Azlina Jamaluddin, the 46-year-old manager at the Global Ikhwan health clinic in Rawang, says, “My friends and my mother told me, ‘You are going to join this movement and your husband will marry another woman.’ It worried me for a while. I didn’t know which way to go. I wasn’t in the movement at full blast. But I really loved God and I loved the movement.”

A born-again Muslim, who only put her headscarf back on in 2001, Azlina admits she was the one convincing her husband, who now has three wives and works part-time for the company, to adopt a polygamous lifestyle.

“Initially, he wouldn’t have married another woman.

He’s just not that kind of guy,” she says, as she prepares to deliver a lecture to fellow female workers.

All of them, she says, are like herself, working women – a privilege, Azlina says, made possible by polygamy, which allows them to share child-rearing responsibilities with their “sisters”.

As the last of the women climb the stairs of the slightly dilapidated building and trickle into the lecture hall of the Rawang estate, Azlina begins, “Jealousy is like chocolate, so don’t be jealous of your sisters. It’s a temptation. You need to learn to fight it.

“What is important is to make God happy. We will get eternal happiness afterwards.”

Arguably, such teachings sound like those of a religious sect – an observation Azlina takes in her stride.

“Islam is not a religion, it is a way of life.”